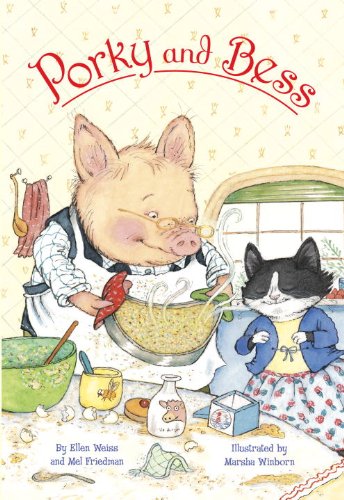 The authors assuredly tread on tried-and-true turf with this cheery, wryly titled early reader starring two best friends who, readers learn, “could not have been more different.” However, it's only early on that any time is spent on their differences. Porky is a rumpled pig whose house is a sty-worthy mess: dirty hoof-shaped socks litter the floor and the three-day-old bread he favors is stored in an unorthodox spot (“He liked to keep it on the kitchen chair”). Bess is a stylish, proper cat who likes everything perfect (“The perfecter, the better”) and whose three feisty kittens are named Two, Three, and Bunky. But these personal preferences have little bearing on the evident friendship between the animals. One evening, they create a “moon cake,” mixing into the batter the key ingredient, “foggy-night-on-the-water.” And by the end, Porky has completed his poem to Bess after finally finding a word that rhymes with “end,” a blank that readers will likely have filled in long before. Winborn's (the Digby and Kate series) lighthearted, detail-filled pictures lend warmth and brightness to the by-the-numbers story line. Ages 4–7.