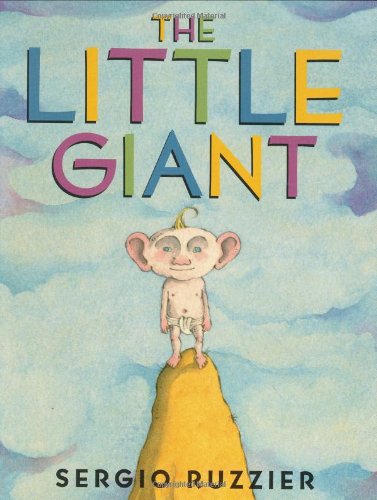 In this tale of peace, a miniature giant and his lookalike, a "big dwarf," thwart a war between their rival clans. Angelino de'Grandi, whose Italian surname implies large dimensions, is tiny compared to his wall-eyed, shirtless fellow giants. His diaper-like white loincloth and the blond curl atop his otherwise bald head lend him an infantile appearance; his towering people want nothing to do with him. Angelino sadly leaves his mountain home and wanders into the rocky territory of his near-twin, Osvaldo Curti, whose own surname suggests brevity. Osvaldo is alone, too: "[T]he other dwarfs don't like me. They think I am too tall," he explains. The exiles become instant soul mates. Later, when violence breaks out among their villages, Angelino is mistaken for Osvaldo and vice versa. The battle dissolves: "How could the giants and the dwarfs keep fighting, when no one could tell one from the other?" Ruzzier, who illustrated , depicts Angelino and Osvaldo as folkloric figures in an all-male realm, who live in a desert painted in muted greens, soft blues and sandstone yellows and reds. Ruzzier logically suggests that understanding develops when people look beyond superficial physical traits, although the heroes' friendship is based on both external similarities and outcast status. Readers may well ask why the combatants, who have mistreated Angelino and Osvaldo, would revise their opinions in wartime. Ruzzier's mythic style suggests a profound meaning that his good-intentioned story doesn't quite deliver. Ages 3-7.