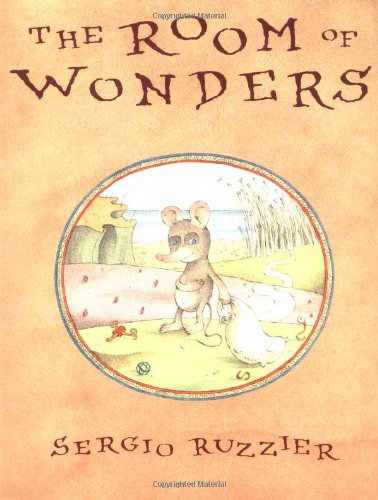 The Room of Wonders

Ruzzier ( ) employs his signature whimsical artwork for this parable featuring a pack rat named Pius Pelosi. Pius collects odds and ends on his long walks and displays them in his Room of Wonders. This long hall, lined with shelves and cubbies, brims with quirky, organically shaped objects that could easily be part of an "I Spy" game, as readers try to locate items from the text ("a dried leaf that looked like a dog, a toy soldier who had lost his gun, a glass eye," etc.). Ruzzier's characters' overlarge eyes and elongated noses seem ideally suited to this tale about inquisitiveness, and subtle humor comes through in the text. Beneath a scene of Pius talking to a pair of visitors to his collection (one being a cat) the text reads, "Sometimes, when he knew nothing about a particular object, he would make up a story so that nobody went away with curiosity unsatisfied." One day, his guests disparage a small gray pebble featured prominently in the room. Readers discover its significance: it was the first thing the hero ever collected. Yet Pius gets rid of it, then chucks his entire collection. The austere backdrops of European-looking passageways and desolate landscapes dotted with peculiar tubular plants conjure the feeling of queasy uneasiness when one goes against one's gut. The scene in which Pius discovers a new (or is it the same?) gray pebble is worth the price of admission. Sure to prompt good discussion about staying true to oneself. Ages 4-8.