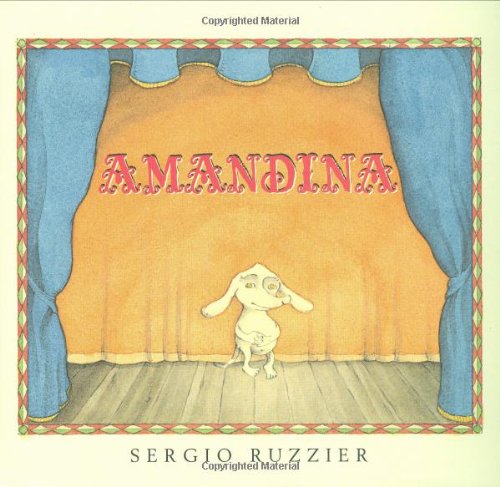 Amandina Goldeneyes, a shy, lonely, long-eared dog, is a talented performer, “but nobody knew that, because nobody knew Amandina.” Amandina decides to rent the rundown Teatro Ventura “in the old town” and spruce it up. She designs costumes, sets and props for her solo debut, which will involve performing music, acrobatics and the role of Beauty opposite a hinge-jointed puppet Beast. But despite her publicity and promo blitz, despite a marvelous dream the night before, the curtain rises to an empty house. Ruzzier ( ) creates a haunting intimacy with his watercolors of a centuries-old Italian town (the theater is a tiny Umbrian jewel) and its strangely human-eyed animal citizens, as well as his unvarnished language (“Nobody had come. Sometimes these things happen, and nobody can say why”). Showing a magical insight into the imagination of small children, he allows Amandina an intense sweep of feeling before granting her no less—but no more—than her wish. The mood he casts will resonate, particularly with introspective readers. Ages 2–6.