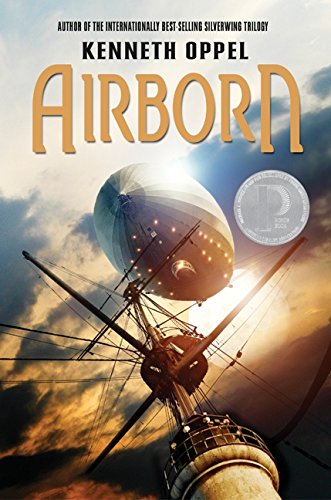 In crisp, precise prose that gracefully conveys a wealth of detail, Oppel (the Silverwing Saga) imagines an alternate past where zeppelins crowd the skies over the Atlanticus and the Pacificus, and luxury liners travel the air rather than the sea (references to films by the Lumière "triplets" and various fashions suggest a very early 20th-century setting). Young Matt Cruse works aboard the elegant passenger airship , where his late father also worked. In an exciting opening sequence, Matt rescues an injured old man flying solo in a stranded hot air balloon; the man later dies, but not before telling Matt of "beautiful creatures" that he saw sailing through the air. Matt's curiosity about the man's dying words is piqued a year later when the fellow's granddaughter Kate arrives on board, bearing his journal. As other plot lines develop, pirates attack the , which crash-lands on an island that closely resembles a drawing in the old man's journal. There are minor, pleasing shades of the film throughout—the rich but overprotected girl, the poor but daring and lovable cabin boy, and the vessel itself, which is a sprawling and multifaceted character in its own right—but Oppel places the emphasis squarely on adventure rather than romance, keeping the pace brisk and the characters dynamic. The author's inviting new world will stoke readers' imaginations—and may leave them hoping for a sequel (those curious for a preview can log onto ). Ages 12-up.