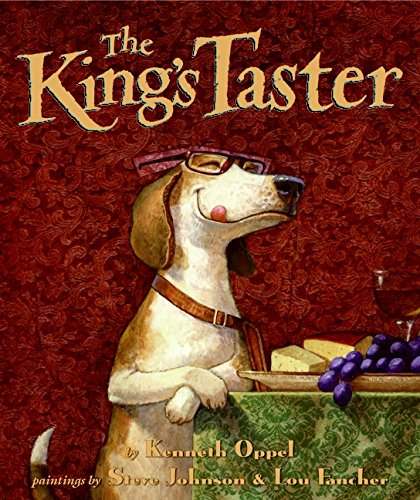 Why won’t the new king eat the cook’s magnificent food? Max, the cheery, bespectacled hound who narrates the story, used to taste the king’s food to test for poison; now he spends most of his time consoling the cook. In an attempt to satisfy the fussy king—a small boy with a wobbly crown and a horrible scowl—Max and the cook travel the world in search of the rarest delicacies—French fries, pizza, chili tacos—to no avail. When Max discovers the king snacking on the sly, ruining his appetite, he alerts the cook. “I will tell your mother,” the cook promises the small king. “You wouldn’t,” replies the king. “I would,” says the cook, “and I will.” With the boy finally “eating like a king,” success and reward for the cook and his dog follow. Oppel ( ) cooks up punchy, ready-for-television dialogue, while the rich, textural spreads of Johnson and Fancher ( ) make use of unexpected materials—recipe cards for the cook’s clothing, for instance—and kid-pleasing details, as when the king splatters a whole pizza against a wall via catapult. Ages 3–6.