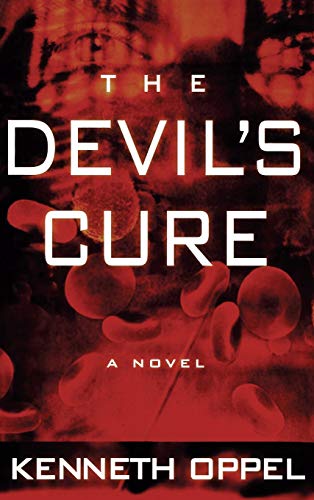 Oppel (), a prolific author of popular books for children and young adults, shows versatility and imaginative brio as he delves into adult fiction for the first time, composing a thriller about a prison escapee whose blood may contain the key to curing cancer. That man is David Haines, a death row inmate convicted of killing several doctors because their research conflicted with his extreme religious beliefs. Haines escapes from a maximum-security prison in Illinois during a visit from Dr. Laura Donaldson, who wants to test his blood because it has shown cancer-fighting properties. Haines, however, considers his blood sacred, and once he breaks free after shooting several guards and hijacking a truck, he begins killing his family members to further foil Donaldson's research. The manhunt is led by FBI agent Kevin Sheldrake, who caught Haines four years earlier. Sheldrake is a complicated character, a man whose religious beliefs (he was in a cult as a young man) have stymied his career advancement—yet those same qualities make him the best man to track Haines, whose past also includes a stint in a cult. With Donaldson in tow, Sheldrake follows Haines to the Seattle area, where the escapee intends to find and kill his only son. Several scenes severely test credibility, yet the action moves with undeniable force. While Donaldson and Sheldrake both suffer from a touch too much angst, the story's three main characters come across as strong and clearly defined. Oppel has done his research into both cults and cancer; his presentation of both elements—sufficiently detailed but never belabored—helps camouflage some of the plot's more glaring holes.