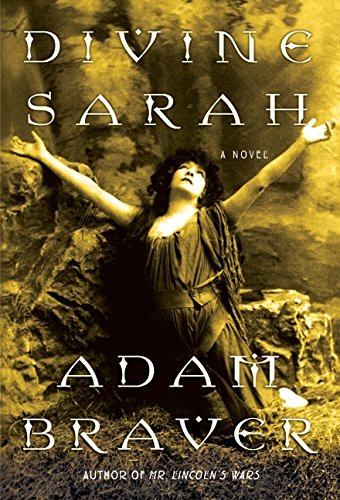 "Loosely based on real circumstance," Braver's poignant and inventive second novel (after ) follows a week in the life of internationally renowned stage actress Sarah Bernhardt. As the story opens, she is 61 and on what should be a glorious Farewell Tour of America, but her career is losing steam. There's word that her California stage performances have suddenly been relocated to Venice from Los Angeles, and to make matters worse, a conservative religious group has boycotted Bernhardt, dubbing her show "immoral and unfit for performing downtown." Never one to succumb to pressure, and always primed for scandal, the resilient Bernhardt goes fishing. Before a ravenous audience of 50 reporters, she catches a sea bass, cuts it open with her hotel key and mashes her face into the bloody viscera—all "with a tragicomic smile." Bernhardt's antics are closely monitored by publicity guru Abbot Kinney and loving gay manager Max "Molly" Klein, who keeps her focused, protected and working harder than ever. Bernhardt's sudden mood swings are imagined with sympathetic verve and a light comical touch, but nothing rivals her cocaine-inspired recitation to an enraptured Thomas Edison. As the novel closes, Bernhardt is still playing Marguerite Gautier in , rapturously enjoying multiple curtain calls with a prosthetic leg at 76. Braver has produced a gracefully inspired story about the unavoidable effects of age on fame.