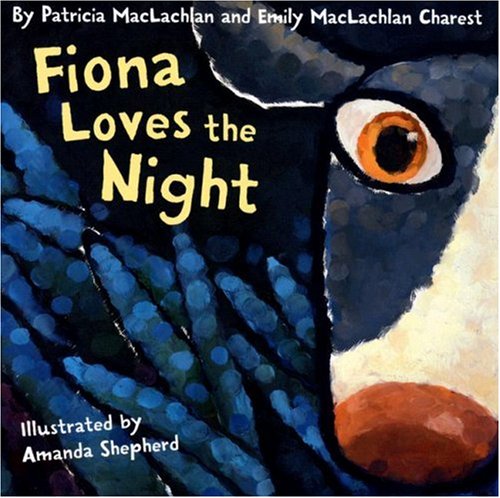 Awakened by moonlight streaming through the window, young Fiona slips out of her covers and into her backyard. “The night wraps around her like a velvet coat,” gently declare the co-authors (Charest is the Newbery Medalist’s daughter; they teamed up most recently for ). “It is silent. It is safe.” In simple, lyrical prose, the authors measure Fiona’s delight in the plants and creatures that come to life after the sun goes down: “There is a moon in the middle of the pond. All around her the frogs jump into the water, making the moon wrinkle.” Shepherd (previously paired with MacLachlan for ) renders the night and its inhabitants in lush, comforting tones. Fingerpainted textures, applied both in strokes and in precise, printlike daubs, convey the dappling moonlight as well as the energy that makes the nocturnal world anything but sleepy. Off-kilter angles and extreme close-ups dominate the compositions, as befits the exotic setting, but the rich palette and heavy black outlines anchor the pictures—they’re dreamy rather than nightmarish. All in all, the night is a benevolent place: the moon smiles down on everything, and the creatures, like the orange-eyed barred owl that stares out of one of the pages, seem as curious about the human interloper as she is about them. Children who fear the dark could learn a lot from Fiona. Ages 4-8.