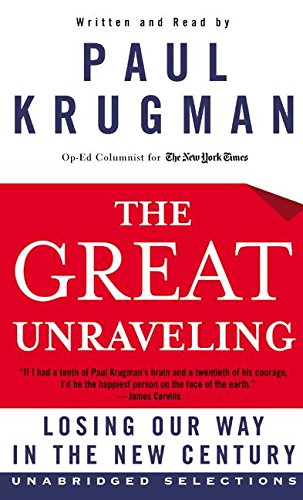 THE GREAT UNRAVELING: Losing Our Way in the New Century

"This is not, I'm sorry to say, a happy book," says Krugman in the introduction to this collection of essays culled from his twice-weekly op-ed column, and indeed, the majority of these short pieces range from moderately bleak political punditry to full-on "the sky is falling" doom and gloom. A respected economist, Krugman dissects political and social events of the past decade by watching the dollars, and his ideas are emphatic if not always well argued. He has a somewhat boyish voice and a pleasingly enthusiastic tone, although his enthusiasm sometimes leads him to take liberties with punctuation. The essays are grouped thematically instead of chronologically, which gives this audio adaptation a scattershot feel. Since these pieces were written over a long stretch of time, certain key ideas recur quite often—political reporters don't pay enough attention to the real news, the Bush administration is dishonest, big corporations are inherently untrustworthy—and can become tedious. To his credit, Krugman is not entirely partisan—he reveals himself to be a free-market apologist—and even listeners who disagree with most of the things he says will likely be taken in by his warm and energetic delivery.