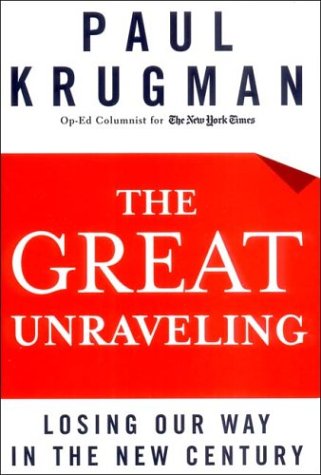 THE GREAT UNRAVELING: Losing Our Way in the New Century

This selection of three years of op-eds by economist and Princeton professor Krugman document his opposition to the governance of George W. Bush and his "bad economics wrapped in the flag." In his introduction, Krugman asserts that Bush is a radical and that America's right wing is "a revolutionary power... a movement whose leaders do not accept the legitimacy of our current political system." The core of the book's 100-plus columns is dedicated to eviscerating Bush's fiscal policies, uncovering the administration's hidden agendas, as well as castigating the media for letting him get away with it. A handful of articles advocate the globalization of free trade. Much of the material will be familiar to readers, but reading the items together reveals Krugman's growing anger at the hubris he sees exhibited by the extreme right wing and its seeming defiance of logic. At first, Krugman is a numbers man, methodically parsing the data (demonstrating, for example, how the heartland is not, statistically, more committed to family than people on the coasts), but over time he arrives at the conclusion that "Yes, Virginia, there is a vast right-wing conspiracy" and "it works a lot like a special-interest lobby." Krugman is one of the few commentators able to sound both appalled and reasonable at the same time as he provides an alternate history of the last three years to that penned by conservative pundits. Many readers will find Krugman very persuasive as to how our present government has done us wrong.