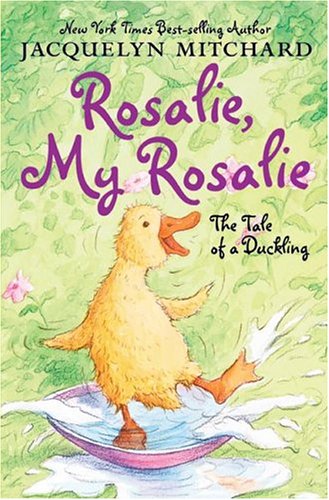 Rosalie, My Rosalie: The Tale of a Duckling

Mitchard ( ) relays an endearing tale just right for newly independent readers, focusing on the friendship between Henry, an "almost" nine-year-old girl, and her pet duckling, Rosalie. Henry is bothered by the fact that a) she was "a girl named after her father" and b) her parents are perfectly content with their "nice, quiet house and their nice, (usually) quiet little girl. The way Henry saw it, too much quiet stops being so nice." But the household becomes less tranquil when her father brings home a fuzzy duckling. As the girl and feathered friend bond, readers learn about imprinting and behavior conditioning. For instance, Rosalie, having imprinted on Henry, throws a "ducky temper tantrum" when the girl puts the pet in her cage at night; so Henry allows Rosalie to sleep on her pillow, where she leaves droppings. In a comical if improbable follow-up, Henry begins diapering her duckling until she can train her to "go flop" outdoors. The book also explores the difficulties of letting a domesticated animal loose in the wild. A cheerful conclusion caps this agreeable story, whose brief chapters and generous sprinkling of half-tone illustrations make it an ideal early chapter book. Ages 8-12.