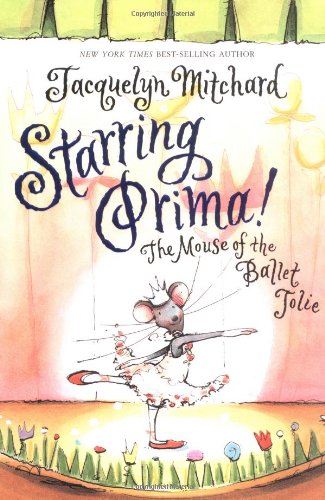 STARRING PRIMA! The Mouse of the Ballet Jolie

Mitchard (author of the adult bestseller ) turns out a flimsy, often sluggish novel about a mouse who is born in a piano, backstage at New York's Ballet Jolie, and who opens her eyes just as a prima ballerina performs onstage. "Prima!... That is who I am. I will be the principal dancer of the Ballet Rodente," announces the mouse. She successfully debuts in the title role in "Whiskerella," performed on an overturned milk crate, yet Prima aspires to dance for human as well as mouse audiences. After her parents punish her for making a surprise appearance in a human ballet performance, the determined dancer's luck changes. She meets Kristen, nine-year-old daughter of the ballerina after whom Prima named herself (they have no trouble talking, Mitchard explains, "as all children can understand most animal languages"). Prima moves into Kristen's posh apartment, where the tiny ballerina happily performs on the stage of a puppet theater. A trip to Paris brings love for Prima, and Kristen returns to America without her. The unabashedly sentimental ending takes Kristen back to Paris to learn that Prima has gone "to the stars," yet she shepherds the mouse's daughter, another aspiring ballerina, home to New York, to raise her own mouse children in Kristen's piano. Mitchard conveys the bond between Prima and her human pal, but inane word play, coy exposition and protracted dialogue will likely turn off even balletomanes. Ages 8-up.