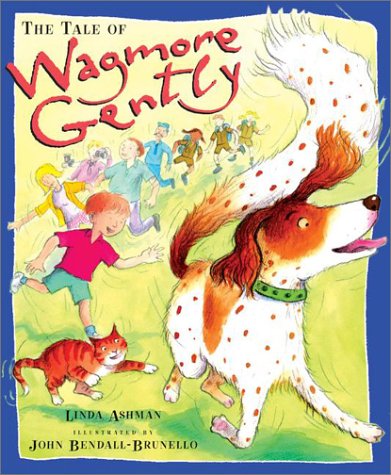 THE TALE OF WAGMORE GENTLY

The tail wags the dog (literally), but also saves the day in this somewhat shaggy picture book about a rambunctious pup. Wagmore's large and powerful tail seems to disrupt or destroy everything in its path ("A mere twitch can wreck a game of checkers"). As a result, the Gently family scolds their perky pet and threatens to leave him behind while they go on a favorite hike. Wagmore gamely studies psychological texts and practices self-control methods, with some success ("I am Master of my Tail, and !"), earning him permission to go on the outing. But when young Jack Gently becomes lost during the hike, Wagmore reverts to his wagging ways, facilitating Jack's rescue. Unfortunately, Ashman's () uneven fish-out-of water story doesn't sustain the charm of its punny title. Many readers will quickly sympathize with Wagmore, who is often made to feel bad about doing what comes naturally. Bendall-Brunello's () jaunty pencil-and-watercolor illustrations convey Wagmore's peppy personality and constant motion. Throughout, talk balloons and thought bubbles offer humorous asides. Ages 4-8.