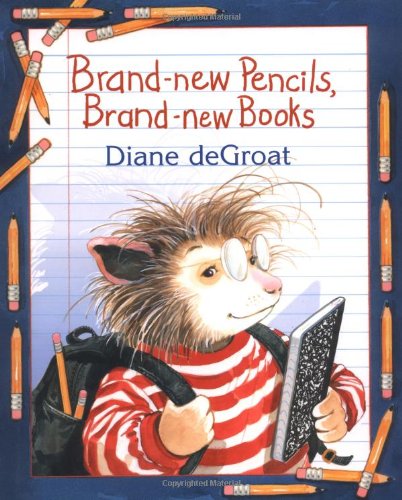 In this prequel to deGroat's series of Gilbert tales ( ), the earnest young opossum survives—quite easily—his first day of first grade. As in the earlier stories, the author convincingly exposes her hero's emotions, which here are in tune with those experienced by any fledgling first grader. Gilbert is fearful that his teacher won't be nice and, in the classroom, he is embarrassed when he sits at the wrong desk and, at lunch, is afraid that he'll get sent to the principal if he doesn't eat his food. The narrative incorporates some equally true-to-life incidents that would comfort a new student (e.g., sitting by himself in the cafeteria, Gilbert is finally joined by a boy who has "the exact same Martian Space Pilot lunchbox" as he does). And deGroat reassuringly reveals that nobody is good at everything (Philip can read but can't climb a ladder at recess, and Lewis, a good climber, clumsily spills paint on his desk). Perhaps due to its lower-key setting (other capers have Halloween and Valentine's Day themes), this has less spark and wit than some of its predecessors. DeGroat's cheerful art serves up endearing portraits of Gilbert, though several of the busier scenes appear curiously washed out. Ages 4-8.