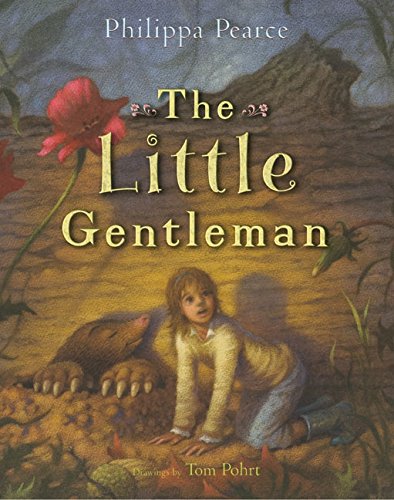 Pearce ( ) offers readers a glimpse into the mysterious friendship between Bet, a quiet girl living with her grandparents in rural England, and a mole she encounters on the riverbank near the grounds of their neighbor, Mr. Franklin. Bet's grandmother keeps house for Mr. Franklin, who has just broken his leg as the story opens. He asks Bet to perform a curious favor: to sit on a log on the riverbank and read aloud from a book about earthworms. At the sound of her voice, a mole leans out of his hole and strikes up a conversation with the girl. Gradually, Bet earns his trust, and the mole shares the tale of his past—which stretches back more than 300 years. He earned the name "little gentleman" for the role he played in unwittingly aiding the Jacobites in deposing King William III—they, in turn, played a part in endowing the mole with his gift of speech and certain magical powers. Bet also confides in the mole: she shares with him her anxieties about the impending meeting with her mother, who abandoned her at birth. Their friendship takes a Carroll-like turn when the mole shrinks Bet down, –style, to show her his intricate tunnel system; and the fact that it takes their combined efforts to achieve this magic plays a role in the novel's climax. Some erudite themes (the historical threads, discussion of Darwin and Tennyson, etc.) make this best suited to more accomplished readers; but Pearce's exploration of what defines friendship and discovering one's true nature will resonate with a wide audience. Pohrt's pen-and-inks better convey animals and nature than Bet's character, but his chapter openings help contribute to the tale's feeling of a good old-fashioned storybook. Ages 8-up.