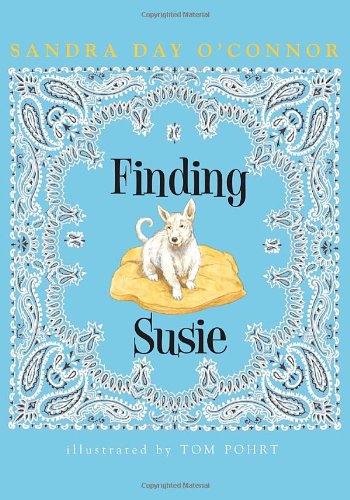 “I wonder if this will be the year Mother and Dad will let me have a pet,” young Sandra thinks wistfully in the opening scene of this warm picture book by the former Supreme Court justice. With her parents' permission, the bright-eyed, curly-haired tomboy brings home several animals foound near their ranch (including a lost baby bobcat and an injured coyote that she names Slim Pickins and nurses back to health), releasing each in turn after acknowledging that it belongs in the wild. The straightforward, relatively lengthy text eloquently conveys the girl's concern for the animals as well as her longing for a pet that will reciprocate her affection. This she finds in a friendly stray dog, Susie, who turns out to be the perfect pet. O'Connor's narrative, based on her own southwestern childhood, incorporates tidbits about the habits and habitats of the species Sandra cares for, which helps bring the story's setting to life, as do Pohrt's ( ) simple yet evocative watercolors. Using a tawny palette, Pohrt offers realistic portrayals of the expansive scrubby terrain and sky, and of the humans and animals alike. Endpapers featuring photographs of a young O'Connor on her ranch (as well as Bob the bobcat, Susie and some of her other pets) lend this already personal story additional depth. Ages 4–8.