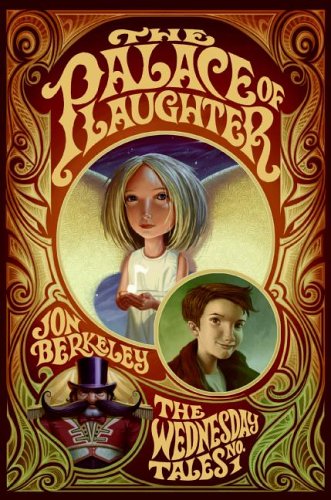 The Palace of Laughter

An ominous traveling circus makes for a splendid setting in Berkeley's ( ) first book in the Wednesday Tales. Ten-year-old orphan Miles Wednesday lives in a barrel, having escaped repeatedly from the Pinchbucket House orphanage, where laughter is forbidden. When the Circus Oscuro arrives in town one night, Miles sneaks in—and witnesses a tiny girl falling from a precarious height, only to be saved by the two wings on her back. Miles befriends the girl, whose name is Little and who turns out to be a 400-year-old angel, held by the circus against her will. Silverpoint, Little's mentor angel, was captured by the same circus and taken to the "Palace of Laughter." Miles decides to help her find him, but his quest becomes less selfless when the circus master kidnaps his beloved teddy bear, which Little only recently brought to life. At the Palace, the adventurers discover the charlatan the Great Cortado, who hypnotizes the masses and "sucks the laughter out of their souls"—their laughter can be reinstated with a serum that Cortado makes a fortune dispensing. Berkeley weaves painterly details into his depiction of this night-shaded Big Top world, where danger can be imagined around every corner. But he also injects an ample measure of humor to keep the darkness at bay. Ages 8-12.