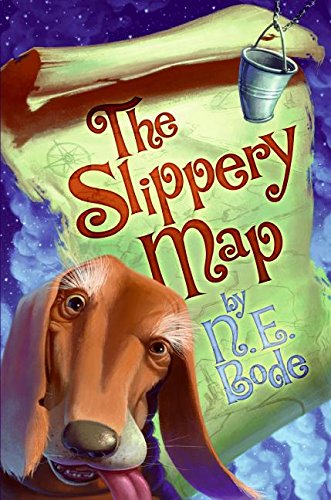 At the heart of this inventive, far-reaching fantasy is Oyster R. Motel, an earnest 10-year-old raised in a nunnery shared by 13 nuns who have taken vows of silence—anticipating objections to a boy in a “nunnery,” the author interjects: “You can't be overly rigid about the English language. (Nurses don't live in nurseries! Novels don't live in novelties!)” But as he grows up, normally and noisily, he wears out his welcome with everyone but the nun he thinks of as Sister Mary Many Pockets, who found him as an abandoned infant (she named him for the motel towel wrapped around him). On a rare venture outside, Oyster meets a old woman who maps children's Imagined Other Worlds. She tells him of two youngsters—later revealed as Oyster's parents—who once slipped inside the map they created, traveling through the Gulf of Wind and Darkness into their imagined world, never to return. Accompanied by a dachshund belonging to the nunnery's child-hating lone employee, Oyster is soon transported through that same Slippery Map to the Other World, where the evil Dark Mouth holds his parents prisoners. In a Harry Potter–esque twist, Oyster is heralded as “the boy,” the long-awaited hero entreated to take up his parents' crusade to destroy the villain and end his cruel regime. Writing as Bode ( ), Julianna Baggott effortlessly renders an expansive, entertainingly quirky cast of creatures benign and malevolent. Her snappy prose makes the case for the story's explicit messages about the value of unbridled imagination. Ages 8-12.