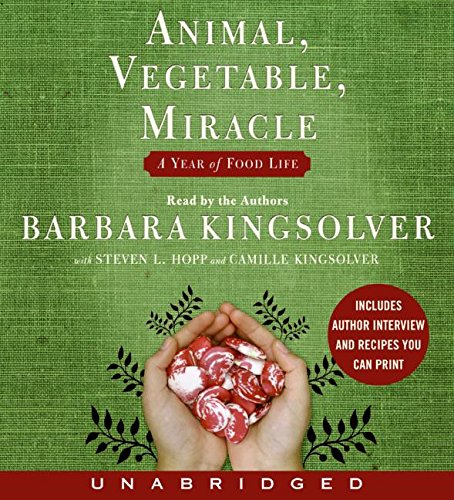 In her engaging though sometimes preachy new book, Kingsolver recounts the year her family attempted to eat only what they could grow on their farm in Virginia or buy from local sources. The book's bulk, written and read by Kingsolver in a lightly twangy voice filled with wonder and enthusiasm, proceeds through the seasons via delightful stories about the history of their farmhouse, the exhausting bounty of the zucchini harvest, turkey chicks hatching and so on. In long sections, however, she gets on a soapbox about problems with industrial food production, fast food and Americans' ignorance of food's origins, and despite her obvious passion for the issues, the reading turns didactic and loses its pace, momentum and narrative. Her daughter Camille contributes recipes, meal plans and an enjoyable personal essay in a clear if rather monotonous voice. Hopp, Kingsolver's husband and an environmental studies professor, provides dry readings of the sidebars that have him playing “Dr. Scientist,” as Kingsolver notes in an illuminating interview on the last disc. Though they may skip some of the more moralizing tracks, Kingsolver's fans and foodies alike will find this a charming, sometimes inspiring account of reconnecting with the food chain.