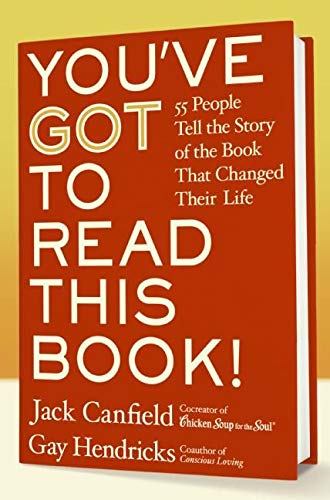 You've Got to Read This Book: 55 People Tell the Story of the Book That Changed Their Life

Canfield, the brains behind the Chicken Soup for the Soul series, and Hendricks ( ) stay in the inspirational mode with this collection of dozens of entertainers, sports personalities, businesspeople, writers, environmentalists and activists telling up-by-their-bootstraps stories involving books. Some, like Dave Barry (inspired by humorist Robert Benchley) and Lou Holtz (David Schwartz's ) are well known. Other are recognizable for the products they've created: Craigslist founder Craig Newmark praises , which mirrored his own early belief in the power of the Internet. Among the more memorable contributions is that of 21-year-old Farrah Gray, who spent his early childhood on public assistance, read Deepak Chopra's at age 11 and made his first million at 14. Two contributors—motivational speaker Lisa Nichols and eBay COO Maynard Webb—cite Stephen Covey's best-selling . Covey himself was uplifted by heady reading—Holocaust survivor Victor Frankl's and E.F. Schumacher's —both books, he says, affecting everything from his parenting to his teaching. It's a mixed bag, more uplifting than literary, but readers may find the book that turns them on the way these contributors were. .