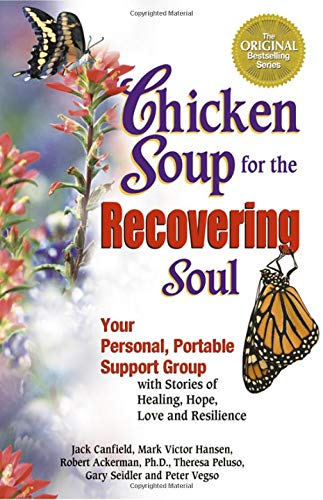 CHICKEN SOUP FOR THE RECOVERING SOUL: Your Personal, Portable Support Group with Stories of Healing, Hope, Love and Resilience

Although most of the stories in this inspiring, well-organized contribution to the bestselling series deal with drug and alcohol abuse, other topics are discussed, such as diabetes, eating disorders, the trauma of mourning, as well as spousal and parental abuse. The personal anecdotes include the story of Perry, who had undergone four failed attempts at rehab to overcome alcohol dependence. After a two-week bender he speculated on "whether I would be better to my family alive or dead." Deciding he wasn't ready to die, he became sober, addressed the causes of his depression and eventually became a professional counselor. Another contributor, Elizabeth, was obsessed with cutting herself from childhood until she entered college. When she finally spoke with others about her self-destructive behavior, Elizabeth found the assistance of religious convictions, caring parents and a supportive fiancé and friends helped her to stop cutting. Also included are accounts from those who love and care for addicts, like Ann. By attending meetings for families of alcoholics, she found the strength to take care of herself first: sad but determined, she left her husband when it became clear that he would not overcome his drinking habit. Because it deals with recovery in its varied forms, this is one of the most important, arguably the most important, of all the Chicken Soup books. By covering such a wide swath of the recovering community, it will be encouraging to many and should see dramatically high sales.