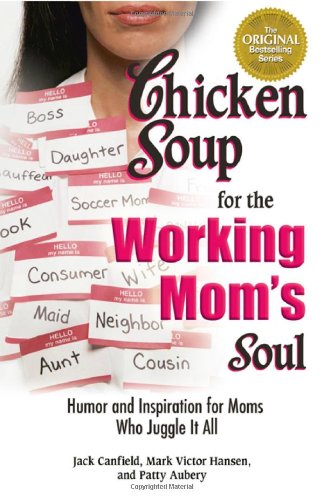 Chicken Soup for the Working Mom's Soul: Humor and Inspiration for Moms Who Juggle It All

If it ain't broke, don't fix it—that seems to be the byword of the creators of the Chicken Soup for the Soul franchise. This time working mothers are celebrated in an eclectic assortment of essays and cartoons. Selections focus either on the lighter side of life as a working mom or on the silver lining in difficult situations. Patricia Moore's essay on raising a grandchild whose mother has been incarcerated falls squarely in the latter category, as does Margaret Lang's essay, which begins with her husband's announcement that he's leaving her and their two small children. Any mother who has ever had the audacity to get sick during the first four years of her children's lives will relate to Mary Vallo's contribution; those who have ever attempted to breastfeed will send out a silent cheer to Ken Swarner for his hilarious account of his wife's attempt to pump breast milk after returning to her office job. Given the realities of life as a working mother, it's also a lucky break for the Chicken Soup folk that their short-short format is so well suited to this particularly busy audience.