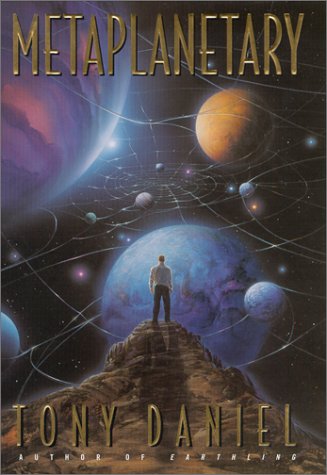 Hugo Award nominee Daniel ( and ) projects a complex, mind-stretching future in his third SF novel, a cross between Bruce Sterling and Doc Smith that teems with vivid characters and surprising action. A thousand years from now, humans use omnipresent nano-matter, "grist," to engineer nonhuman forms for themselves and house their disembodied electronic consciousnesses. Tension has developed between two centers of power. On one side are the inner planets, knit together by massive cables and ruled by a monomaniacal dictator who is sure he knows what's best for everyone. On the other are the inhabitants of the outer planets and the massive spaceships/beings that are beginning to visit the stars. This latter group values diversity and freedom, but decentralization puts it at a disadvantage when the dictator plots to gain total control. As the preparations toward a system-wide civil war gather momentum, the vocabulary and relationships that at first seemed confusing suddenly become simply part of the onrushing action. The novel's only real drawback is that it breaks off early in the war, just as the two sides have squared off against each other. Keeping any moralizing tendencies nicely in check, Daniel seems to want to create an epic vision of humanity. If he can finish the story with the intelligence and energy he shows here, he may achieve that goal.