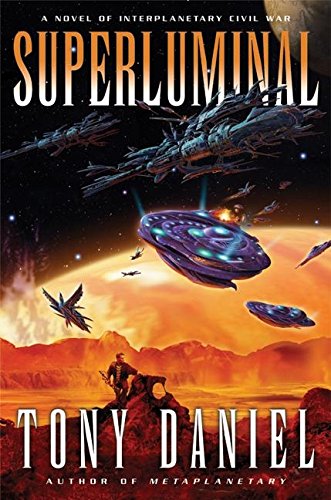 Daniel's much praised (2001) presented an awesome vision of the future in which the Met (a system of super-strong cables like spider webs) connects the inner planets and people can communicate instantly across impossible distances due to the presence of "grist" (a form of quantum nanotechnology that permeates the solar system). In this ambitious sequel, war breaks out between the inner planets, ruled over by the increasingly despotic Chairman Amés, and the outer planets, led by the maverick Federal Army commander Roger Sherman. Meanwhile, a large cast of characters, some of them human, some complex computer-programs, but most some combination of the two, live out their lives. This is large-scale space opera with an enormous cast, spectacular battle scenes and 11 appendices to help readers keep things straight. The novel doesn't work quite as well as , in part because the space warfare becomes a bit repetitious and in part because, as the middle book in what will be at least a trilogy, the tale comes to no real conclusion. Nor is Daniel's work as intellectually challenging as that of such writers as Ken MacLeod, Alastair Reynolds and Stephen Baxter. Still, there's much to like here, particularly for fans of Golden Age great E.E. "Doc" Smith. ( )