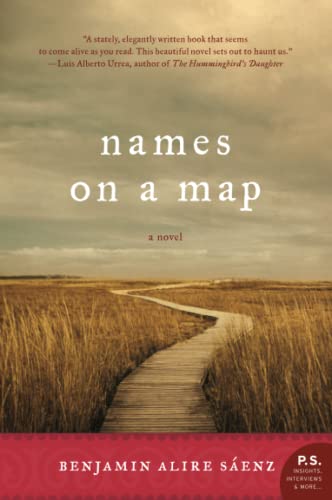 Names on a Map

In Sáenz’s lyrical sixth novel, Octavio Espejo leads an ordinary life in multiethnic 1967 El Paso: he sells insurance and is raising three children with his wife, Lourdes. Octavio was brought to the U.S. from revolutionary Mexico as a child and talks about the family’s roots across the border, but on the whole the family has silently Americanized. The Vietnam War and the counterculture, however, begin to change how his children conceive of themselves and their lives—teenaged twins Gustavo and Xochil in particular. Gus must make choices about facing the draft; Xochil, a rape victim when she was 12, attempts to reconcile the era’s passions with internal bitterness. Sáenz shifts perspectives fluidly among the family, relatives and friends. The climax is given away early, keeping the focus on the manner in which the characters come to know themselves—or fail to. The result is a beautiful mosaic of the borderlands as women’s liberation and the Chicano movement gain traction.