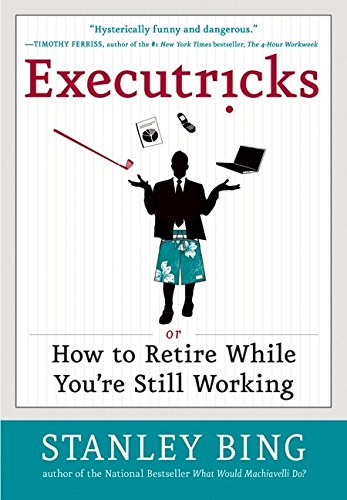 Executricks, or How to Retire While You're Still Working

In this salty satire of a business guide, Bing ( ) invites “anyone with a job and a desire to shirk it” into his program of retiring while still on the job. “I'm scared to retire. That way lies senescence, superfluity, and too much thought about fiber. Not to mention, you know, Death,” he writes, and he isn't a mite too enamored with the drudgery of the working life. Bing's solution is to live like a CEO while a mere drone, and his slacker's guide dispenses pithy advice on the arts of delegation, abuse of status, napping on the job and the all-important acquisition of a career-building table at important restaurants. And why work excruciatingly long hours when you can fake job devotion through the clever manipulation of your handy BlackBerry? Though the tone turns from gently mocking to earnestly didactic by the end, the book makes a great gift for the legions of would-be retirees and provides laughter and relief from the anxieties of corporate culture.