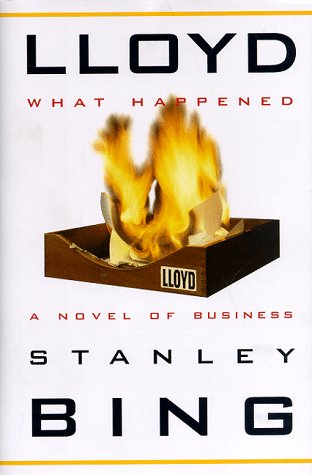 Lloyd: What Happened: A Novel of Business

In his first novel, Bing, columnist for Fortune and author of Crazy Bosses and Biz Words, offers a light satire of business life packed with glimpses, both funny and appalling, into the mentality of six-figure executives among whom every word, smile, memo and drink has its valence in the game of status. Bing's protagonist is Lloyd, a kind of middle-aged everysuit who's assigned a key role in a deal that will transform his corporation into a transnational giant and render its managers, including Lloyd, very rich. It will also, via the wonders of downsizing, result in personal catastrophe for thousands. Of course, this makes Lloyd feel bad, but what's a guy to do? He's got two kids who like toys and a wife who likes vacations. In the midst of the turmoil, Lloyd falls into an adulterous affair with Mona, a fellow exec, at the same time that he learns his wife is getting it on with the handyman. But plot is not the point here. The book is really a series of digressions and skits in which Bing touches on various aspects of corporate culture in episodic, ironic fashion. There are visuals, too: a bar graph measures Lloyd's expenditures on toys for his kids against his disposable income; a diagram illustrates how not to work a party; a pie chart called ""Things Eaten by Donna"" breaks down his wife's diet into only three segments (salads, sweets, white wine). Many of the gags, visual and verbal, work, and much of the book is very funny. But by the time Lloyd at last engineers a revolution to kill the deal and save all the innocents from losing their jobs, one feels that 400 pages is an awful lot of space to fill with such a light lampoon. Major ad/promo. (Apr.) FYI: Bing is a pseudonym for Gil Schwartz, director of communications for CBS Inc.
close
Details