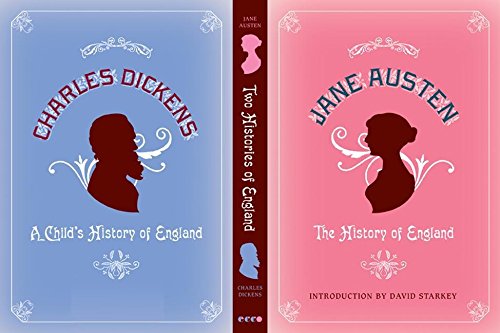 Unbeknownst to most readers today, Austen and Dickens each wrote a satiric history of England. Austen's —written in 1791 when she was 16—is a deliberate parody of the intellectually vapid histories to which girls of her class were routinely subjected. Reprinted in its entirety, Austen's juvenilia is witty, cold-blooded and contrarian: during Henry V's reign, she writes, “Lord Cobham was burnt alive, but I forget what for,” and the history's purpose is supposedly to vindicate Mary Queen of Scots and “abuse” Elizabeth. Dickens was already a bestselling novelist when he published in the early 1850s, which was part of the British school curriculum for decades; an excerpt appears here. Using plain language, sharp if heavy irony and evocative detail, Dickens is radical and opinionated: Elizabeth is “coarse, capricious, and treacherous” and James I is a greedy, dirty drunk. Although a knowledgeable introduction by historian and TV presenter Starkey ( ) offers interesting biographical tidbits and puts each book in its proper context, American readers will find these to be amusing minor works by a pair of English national treasures.