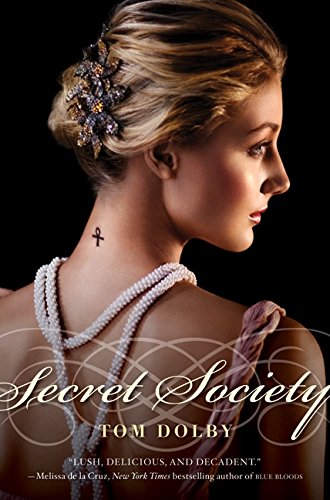 There’s plenty of pomp, snootiness and closely guarded secrets to go around in this first book in a planned series, Dolby’s foray into YA writing. A group of 15 teens—plucked from the cream of New York’s Nat Sherman–smoking, Marc Jacobs bag-toting prep school elite—are given VIP passes to a glamorous underground world. Exclusive all-night parties in undisclosed locations are the norm, bottomless alcoholic beverages are supplied and unquestioning loyalty is expected. Following three chosen ones—fledgling club promoter Nick, wannabe artist Phoebe and jewelry designer/fashionista Lauren—as well as outsider Patch, the foreboding story has the feel of a hazing about to go awry, especially when the three slowly realize that the Society and its “benefits” aren’t what they seem (confirming what readers will suspect all along). While the somewhat interchangeable characters teeter into archetypal/stereotypical territory, readers are likely to be too caught up in the suspense to notice. Dolby covered similar ground—private school upbringings, influence peddling and the deceptive merits of the nouveau riche lifestyle—in his second novel for adults, , but who’s complaining if the formula works? Ages 12–up.