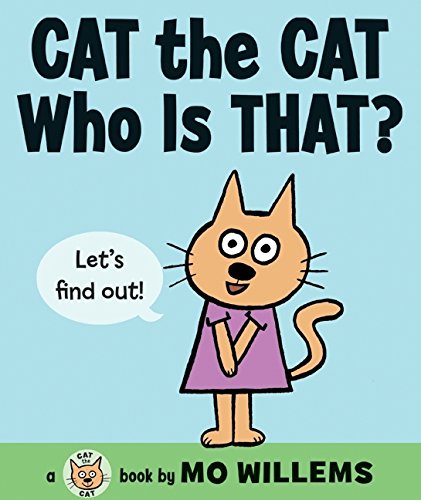 Cat the Cat, Who Is That?

In Cat the Cat's friendly world, names are an uncomplicated affair, most of the time. This early reader pictures Cat, an irrepressible kitty in a purple dress, skipping and cartwheeling to greet pals like Mouse the Mouse and Fish the Fish. All is well until Cat meets a chartreuse creature with eyestalks, a blue tongue, four arms, and three legs. She skids to a halt and her tail electrifies. The individual, unrecognizable but clearly amiable, stops stacking blocks to say, “Blarggie! Blarggie!” This time Cat's initial response to the repeated question, “Cat the Cat, who is ?” is “I have idea,” but Cat finally decides this might be “a new friend!” and responds with a bouncy “Blarggie!” of her own. Willems provides just enough humor and surprise to entertain youngest audiences and subtly suggests some future reading: Duck the Duck cradles a Pigeon doll, and in a second book being released simultaneously— —another character rides a Pigeon playground toy. Cat could become another favorite; her personality sparkles in expansive gestures and gleeful interactions. Up to age 5.