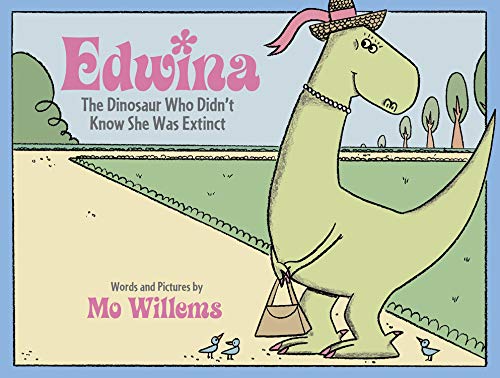 Edwina: The Dinosaur Who Didn't Know She Was Extinct

Matronly Edwina, a lichen-green T. Rex wearing a beribboned straw bonnet and toting a lavender handbag on her claw, loves doing community service. Crayony sketches show her fixing a street lamp (no ladder necessary) and letting kids slide down her back. "Everybody loved Edwina... except Reginald Von Hoobie-Doobie." Reginald, a precocious boy with malicious tilted eyebrows, passionately delivers a report on " 'Things That Are Extinct.' Specifically, dinosaurs." His classmates, whose doodles of Edwina hang on the bulletin board, swiftly contradict him and run outside to have some of the dino's homemade cookies. Yet Reginald doesn't give up (and another book might present such stubbornness as admirable). His desperate efforts to be heard finally attract Edwina's maternal solicitude, and in a bombastic pantomime sequence, he presents her with "the truth about dinosaurs." Afterward, "Reginald felt fantastic! No one had ever listened to him so well for so long," and Edwina "knew she was extinct." Even better, disillusionment doesn't change Edwina. "She just didn't care. And, by then... neither did Reginald Von Hoobie-Doobie." The fellow has finally found a friend. In the closing image, Edwina bakes cookies for her new pal. Like Willems's , this is a tale about craving attention, but the reassuring tone and expert pacing will win over readers. More important, the book comments on polite debate and helps raise useful questions. Is there such a thing as too much knowledge? Can popular notions be challenged? Should we listen to others, even when we don't agree? For Edwina, ignorance is bliss, but awareness is good, too. Ages 4-7.