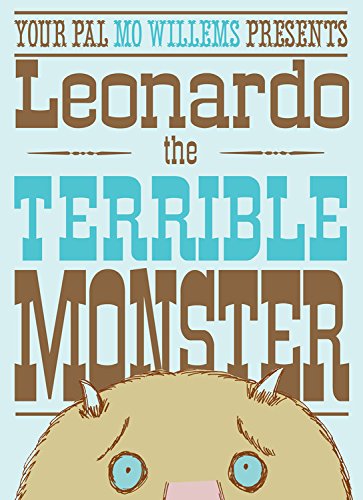 Picture books commonly suggest that monsters, like certain bullies, are insecure and make marvelous playmates. Pint-size Leonardo, a case in point, is "a terrible monster" because "he couldn't scare anyone." As he roars, two people exchange patronizing smiles, and a circus-style, curly-serif typeface implies silly humor rather than danger. Like a Muppet, Leonardo is knee-high with olive-drab fur, a monkey's tail, a pink nose and tiny white horns. "He didn't have 1,642 teeth, like Tony," a six-mouthed purple guy (a footnote explains, "Not all teeth shown"), and "he wasn't big, like Eleanor," whose clawed feet (one sporting a pearl ankle bracelet) barely fit in the spread. Leonardo decides to pick on someone his own size, but when he successfully startles a moping boy, the child begins to wail about a broken toy in inch-tall italics that fill two pages. Leonardo decides that "instead of being a , he would become a ," and dispenses a consoling hug. Willems's ( ) finale feels apt but syrupy; Leonardo's decision to be nice seems homiletic. Yet this is an appealing book, sketched in dark brown against grayish pastel backdrops, with evergreen lettering and highlighted key words. Leonardo accurately mimics a child's frustration at not being taken seriously; Willems suggests trying kindness to get attention. Ages 3-6.