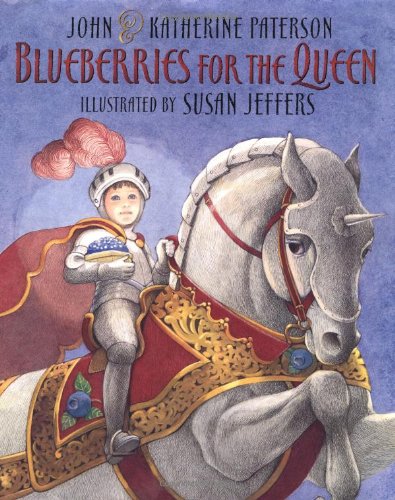 BLUEBERRIES FOR THE QUEEN

John and Katherine Paterson, who previously collaborated on and Jeffers ( ) offer a sweet, fictionalized account of an episode from John Paterson's childhood. William, who lives in the Massachusetts countryside, is still young enough to imagine that knights and magic wands might help defeat Hitler. Then William learns that Queen Wilhelmina and her family, who "had to leave the Netherlands because of the war," have taken up residence nearby. He wonders endlessly about her ("Did she always wear her crown? Or did she have to go about in disguise so her enemies wouldn't know who she was?"), and he envisions himself as a pint-size knight in her service. He asks his father eagerly if picking blueberries is war work. "No," his father replies kindly, "I think it's more like peace work." But William triumphs when a gift of hand-picked blueberries earns him a reception with the Queen. "It will make your mouth rejoice," William tells her, and she agrees. Jeffers switches deftly between William's daydreams and real experiences. As William is about to meet Wilhelmina, a double-page boxed spread imagines her on a throne in splendid raiment, her hand on a pet jaguar. The next page reveals the truth: she's a grandma, with sensible shoes and a black cat, yet just enough details remain the same to tie the scenes together. Only the hardest-hearted will fail to be moved by this skillful presentation of a timeless theme. Ages 4-8.