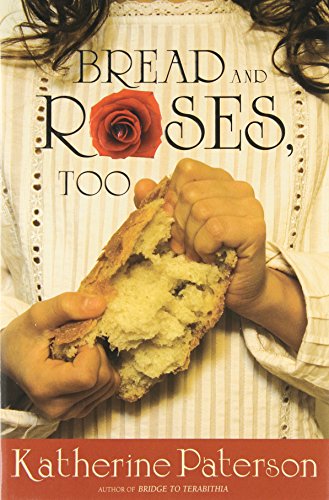 Bread and Roses, Too

Returning to themes she explored in , Paterson sets this novel in the winter of 1912 in Lawrence, Mass., where the plight of textile mill workers unfolds through the alternating third-person perspectives of a boy millworker, Jake Beale, and Rosa Serutti, whose mother and sister work in the mill. The two meet when sixth-grader Rosa looks for her discarded shoes in the trash heap where 13-year-old Jake, who has fled his abusive, alcoholic father, plans to sleep for the night. Though they do not introduce themselves, Rosa offers the boy her family's kitchen floor for the night. Their paths cross again, most notably after the workers strike, and violence escalates to the point where striking parents send their children to families who support the union cause in New York City and Vermont. Rosa, headed to Vermont, helps Jake escape with her. The book feels like two stories in one: the first part immersed in details of the historical strike (an endnote lays out the facts), and the second part set in Barre, Vt. Unlike Lyddie, Rosa is a bystander to the workers' plight (though she does come up with the title mantra for the strikers), so readers may find her character elusive until the book's second half. Jake eventually becomes sympathetic, but mostly due to the kindness of the memorable Mr. Gerbati, the children's foster father and a gifted Vermont stonecutter. Readers may wish for an entire book about this gentle man. Ages 10-14.