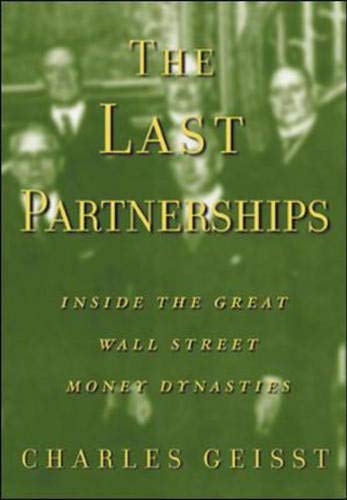 THE LAST PARTNERSHIPS: Inside the Great Wall Street Money Dynasties

Despite the subtitle, this book doesn't throw wide the back-room doors of major investment banking and brokerage firms like Merrill Lynch and Salomon Brothers. Instead, it provides a general history of Wall Street, organized in chronological chapters, each featuring two famous houses. The first chapter covers 1812 to 1873, focusing on Clark Dodge and Jay Cooke. The last chapter runs from the 1930s to the present, featuring Lazard Freres and Goldman Sachs. Most of the material can be found in the author's previous works, and . This reorganization might have yielded new insights had it shown how certain firms helped shape their time and place, and vice versa, or perhaps if it had focussed on the passing of the torch from era to era. As it stands, Ron Chernow's and Martin Mayer's and even Geisst's previous works—are more compelling and better written. Still, Geisst has more understanding of finance than most popular financial historians; despite the drawbacks of this Wall Street history, it represents the various firms fairly and aptly.