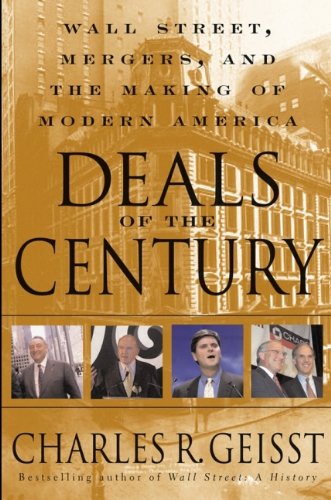 DEALS OF THE CENTURY: Wall Street, Mergers, and the Making of Modern America

Geisst ( ) draws on a storehouse of financial lore in this eye-opening survey of 100 years of corporate deals that have grown increasingly spectacular with each decade. From the century's first megadeal—the formation of U.S. Steel in 1900—through the fabled 1986 leveraged buyout of Beatrice and its even more cantilevered counterparts of the 1990s, he profiles the larger-than-life personalities who have been the driving forces behind the regularly recurring cycle of mergers. Geisst also revels in describing the constantly changing face of corporate financing over the century. The needs of expanding industries like automobiles and retail merchandising couldn't be met by the wealthy financiers in J.P. Morgan's circle in the early years of the 1900s and made the careers of a new breed of investment bankers possible. Geisst shows how the laissez faire economic policy and deregulation that swept in with the Reagan Administration in 1981 set the stage for a deluge of megadeals in previously regulated airlines, energy utilities, telecommunications and banking industries. For all the staggering number, dollar value and complexity of the deals, not to mention the excitement surrounding them, Geisst comes to a sobering conclusion: "Most of the large mergers of the century were nothing more than a way of allowing shareholders and executives to cash out their existing holdings at a profit while often containing costs at the same time by downsizing operations, firing staff and cutting services." Geisst sees the century ending much as it began, with a small group of powerful financial captains determining the structure of our major industries.