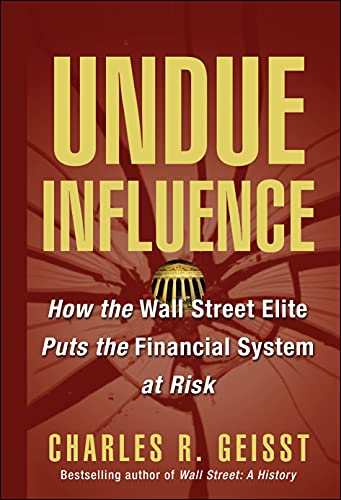 UNDUE INFLUENCE: How the Wall Street Elite Put the Financial System at Risk

The Glass-Steagall Act, separating commercial banks from investment banks, was passed in 1933 to prevent banks from risking depositors' funds on the still-shaky stock market. It was repealed in 1999, when gambling other people's money on the stock market was considered the height of financial probity. In this engaging history of Glass-Steagall, Geisst ( surveys the 70 years leading to this ideological sea change, as the widespread Depression-era populist suspicion of Wall Street subsided, to be replaced with the pro-business dogma of the Reagan era and the New Economy bubble. Formal repeal, Geisst shows, was preceded by decades during which big commercial banks, hungry for a slice of the lucrative investment banking business, increasingly flouted Glass-Steagall restrictions with the connivance of ideologically sympathetic Federal Reserve regulators. The vast sums banks have spent on lobbying and campaign contributions, and the cushy Wall Street jobs awaiting government officials who switch sides, make Geisst wonder whether "the gamekeepers and the poachers had all joined the same club." Geisst provides a lucid guide to the financial issues involved and a colorful account of decades-long political debates and legislative wranglings, while raising troubling questions about the direction of public policy.