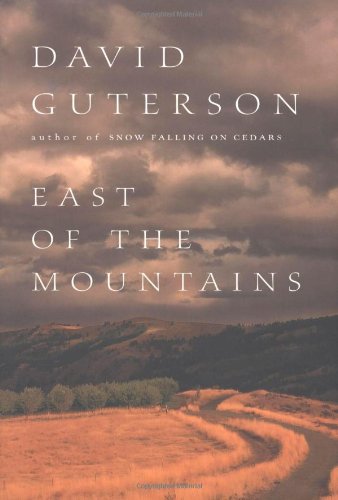 East of the Mountains

A good and decent man's passage through life as reflected in his memories and his experiences on what he intends to be his last day on earth is the burden of Guterson's (Snow Falling on Cedars) deeply felt, honest and quietly powerful new novel. Dr. Ben Givens, a 73-year-old retired thoracic surgeon in Seattle, has terminal colon cancer, a fact that he has kept from his daughter and grandson. Widowed recently after a loving marriage, he decides to forgo the ordeal of dying in stages, and instead to commit suicide in what will look like an accident during a day of quail hunting in the apple-growing country where he was born. But fate interferes with Ben's plan. His van is wrecked when he runs off a slick road, and he is rescued in the first of several encounters that turn into a two-day ordeal. During the cold October night in the sagebrush desert, the narrative rises to a harrowing crescendo when Ben's two dogs are the victims of a marauding pack of Irish wolfhounds. With subtle symmetry, Guterson uses Ben's darkly picaresque misadventure to provide graceful segues into the events of his past. A series of poignant memories occur in flashback--Ben's mother's death; his tender courting of Rachel, who became his wife; his soul-lacerating experiences in combat in WWII and his life-defining epiphany at an army field hospital in Italy--which chart the growth of a man with a strong sense of humanity and responsibility and a steadfast work ethic. The novel begins slowly, and at first one fears that Guterson's attempt to establish a sense of place will result in a dense recital of geographical names. But his unsparingly direct, beautifully observed and meticulously detailed prose creates an almost palpable atmospheric background. At the end of his journey, Ben achieves an understanding about the meaning of life and the continuity of commitment. Wise and compassionate about the human predicament, Guterson's second novel confirms his talent as a writer who delves into life's moral complexities to arrive at existential truths. Agent, Georges Borchardt. 500,000 first printing; $500,000 ad/promo; Literary Guild main selection; author tour; rights sold to U.K., Germany, France, Italy, Japan, Holland, Norway, Finland, Sweden and Denmark; simultaneous release by BDD audio. (Apr.) FYI: Universal Pictures will release the film of Snow Falling on Cedars in fall 1999.
close
Details