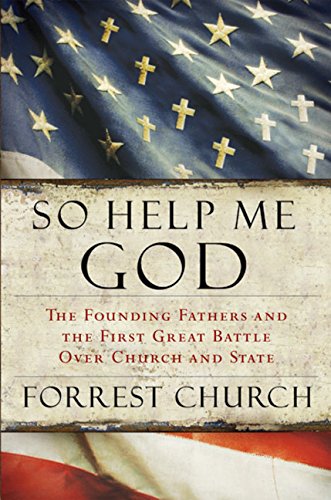 So Help Me God: The Founding Fathers and the First Great Battle Over Church and State

Those who think that the past holds clear and reassuring lessons for today will be hard put to find them here. In this beautifully crafted and timely work, the aptly named Church (minister of Manhattan’s Unitarian All Souls Church and author or editor of 22 books) takes us through the complex thoughts and actions of the nation’s founders in a way that will give pause to most readers. Each of the nation’s first five presidents saw the relationship between government and religion differently; each thought and acted in surprising ways not always in harmony with their private beliefs. What united them, says Church, was a deep commitment to the nation’s welfare as they defined it. This civil religion, grounded in Protestant moral convictions, often took distinctive form, e.g., Washington lashing out at clerical interference in government and James Madison declaring four national fast days. The issues roiling their day were not ours, but they were equally fraught and equally unresolved. Church, who’s too severe and present-minded about John Adams, makes clear that the tangled historic links between religion and politics were built into American history from the start and are unlikely to be dissolved. This is an important work that delights and informs.