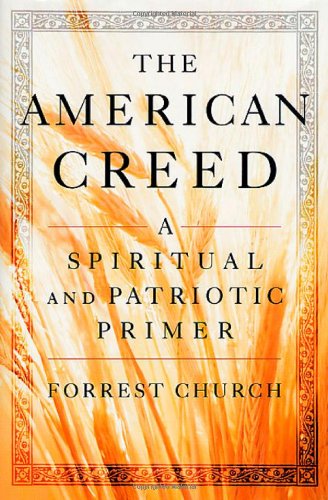 THE AMERICAN CREED: A Spiritual and Patriotic Primer

Church, senior minister at All Souls Unitarian Church in Manhattan and author of and , digs deeply into the American past in this brief treatise on history and faith. Church argues that the "American Creed"—which employs a language of faith but transcends "religious particulars, uniting all citizens in a single covenant"—is an appropriate and generous principle upon which to found a great nation. This creed, he says, is distilled in the Declaration of Independence, which he dissects here alongside many other American standards. He examines the motto "In God We Trust," analyzes national hymns such as "America the Beautiful" and "The Star-Spangled Banner" and studies the holiday tradition of Thanksgiving, which he calls "an American Seder." Those who are familiar with Church's opus, which often features him as a kind of bemused and even cynical observer of the national scene, will be startled to find him optimistic and open-handed here. He resists cheap shots at easy targets, such as the religious right, even while lauding such liberal icons as Martin Luther King Jr. and Eleanor Roosevelt alongside American presidents such as Washington and Lincoln. Innovative chapters also herald the theological contributions of Jonathan Edwards and Roger Williams to the fashioning of American ideals. Church argues for a middle course between fundamentalists who want to inject a narrow Christianity into the national agenda (and claim that the nation's founders would have approved of such an encroachment) and secularists who wish to divorce the state entirely from its roots, which are steeped in faith. This marvelous primer accessibly and fairly explores the intersection of freedom and faith in American life.