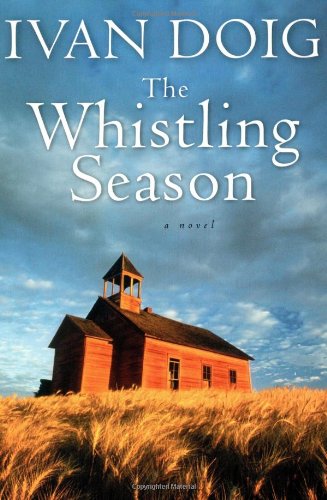 Any writer's work should be judged solely on its own merits, yet in this fine novel by Ivan Doig, one may be forgiven for marveling at the creation of such a work at an advanced stage of this writer's illustrious career. (Wallace Stegner—to whom, as with Doig, landscape was character and event in any story, and particularly Western landscapes—comes to mind with his classic .)

Like many of Doig's earlier novels, is set in the past in rural eastern Montana—and addresses that time and place in distinct, uncluttered prose that carries the full enthusiasm of affection and even love—for the landscape, the characters, and the events of the story—without being sentimental or elegiac. The novel is narrated by an aging Montana state superintendent of schools, Paul Milliron, who is charged with deciding the fate of the state's last scattered rural schools, and who, in the hours preceding his meeting to determine those schools' fate, recalls the autumn of 1909, when he was 13 and attending his own one-room school in Marias Coulee.

Recently widowed, Paul's father, overwhelmed by the child-rearing duties presented by his three sons, in addition to his challenging farming duties, hires a housekeeper, sight unseen, from a newspaper ad. The housekeeper, Rose, proclaims that she "can't cook but doesn't bite." She turns out to be a beguiling character, and she brings with her a surprise guest—her brother, the scholarly Morris, who, though one of the most bookish characters in recent times, also carries brass knuckles and—not to give away too much plot—somehow knows how to use them.

The schoolteacher in Marias Coulee runs away to get married, leaving Morris to step up and take over her job. The verve and inspiration that he, an utter novice to the West, to children and to teaching children, brings to the task is told brilliantly and passionately, and is the core of the book's narrative, with its themes of all the different ways of knowing and learning, at any age.

Doig's strengths in this novel are character and language—the latter manifesting itself at a level of old-fashioned high-octane grandeur not seen previously in Doig's novels, and few others': the sheer joy of word choices, phrases, sentences, situations, and character bubbling up and out, as fecund and nurturing as the dryland farmscape the story inhabits is sere and arid. is a book to pass on to your favorite readers: a story of lives of active choice, lived actively.