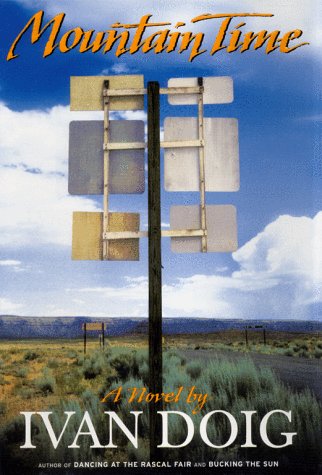 If any writer can be said to wear the mantle of the late Wallace Stegner, Doig qualifies, as a steady and astute observer of life in our Western states. Infused with his knowledge and appreciation of the Western landscapes, his novels are a finger on the pulse of the people who try to reconcile their love of open spaces with the demands of modern life, particularly the form of ""progress"" that threatens the environment. In this ingratiating novel, Doig continues the story of the McCaskell family (seen previously in English Creek, Dancing at the Rascal Fair and Ride with Me, Mariah Montana), this time focusing on sisters Lexa and Mariah McCaskell. Lexa's marriage to a forest ranger and her days as cook in Alaska are behind her; now sturdy, capable Lexa runs a catering service in Seattle. She lives with rugged environmental journalist Mitch Rozier, another escapee from rough life in northern Montana. At 50, Mitch is facing a double crisis: the newspaper where his column appears is about to fold, and his foxy, rapacious father, Lyle, a notorious land despoiler, is dying of leukemia and has summoned him back to Twin Sulphur Springs. Lexa goes back to Montana, too, bringing her sexy sister, Mariah, just returned to the States after a year-long photographing expedition around the world. Lyle's illness and death unleash complex memories and future shocks. Tensions between Mitch and his father, between Lexa and Mariah, and between Mitch and Lexa come to a boiling point on Phantom Woman Mountain on the Continental Divide, where Lyle has ordered that his ashes be scattered. While the narrative eventually achieves cohesiveness, initially it is disconcertingly fragmentary, as Doig intercuts contemporary scenes with flashbacks. Among the novel's considerable strengths, however, are Doig's lyrical writing about scenery (""Up here the continent was tipsy with mountains"") and local history. He excels in lively dialogue (sometimes a tad too cute), and in grasping the nuances of male-female relationships. But most importantly, this is an honest and resonant portrait of idealists facing middle age and learning to deal with past issues that shadow their lives. Agent, Liz Darhansoff. (Aug.)
close
Details