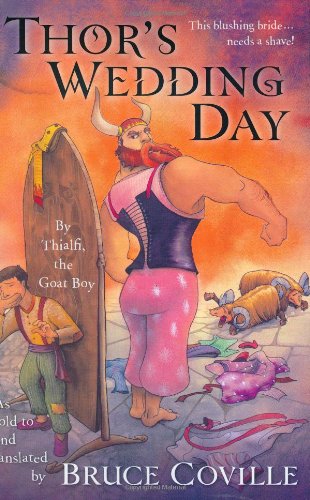 Seasoned storyteller Coville (the Magic Shop books) presents a frolicsome tale inspired by an ancient Norse poem that the author, in a concluding note, calls "a delicious burlesque of the gods." This is also an apt description of his own jaunty story, narrated by Thialfi, an earnest young mortal who serves as goat boy to the mighty Thor, god of thunder. "Sounds as if His Royal Thunderosity woke up on the wrong side of the stall this morning," quips one of Thor's goats when the tempestuous god discovers that Mjollner, his magic hammer and their most powerful weapon against the fierce giants, is missing. Loki, god of mischief, reports that a slobbering giant has possession of the stolen hammer and will return it only when Freya, goddess of love, becomes his bride. The mischief-maker then proposes that since Thor has lost the hammer, Thor should dress as Freya and con the prospective bridegroom out of the hammer. The stage is set for some Shakespearean-style farcical fun as Loki, disguised as Freya's bridesmaid and Thialfi as a goat girl, accompany the faux bride to the world of giants. Coville holds comedy and suspense in satisfying balance while revealing how Thialfi helps the gods accomplish this mission. The animated banter among this diverse cast gives this parody a spirited pace, and Cogswell's full-page drawings make the most of the comic moments. Ages 8-12.