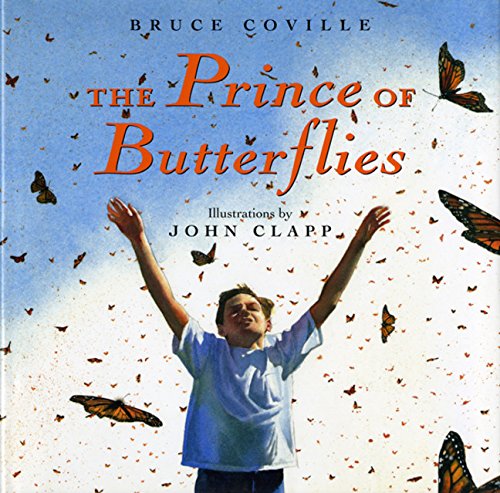 THE PRINCE OF BUTTERFLIES

Coville's () sometimes moving but ultimately puzzling picture book is constructed a bit like a film drama that rolls a documentary-style addendum at the end. One afternoon, a flock of migrating monarch butterflies surrounds 11-year-old John. The green field where the flock had stopped on its path south has been bulldozed for a development. They beg John ("not in words but quite clearly nevertheless") to show them the way to a new resting place, and they transform him into a butterfly ("brushing him with their wings, dropping their tiny scales on... his two legs, four legs, six legs") so that he can lead them there. Both the experience of flying and the privilege of saving the monarchs elate the boy. Clapp's () uncannily lifelike watercolors feature close-ups of butterflies and aerial shots. The story's second section follows "John Farrington" as he grows up and becomes an activist who helps pass legislation to preserve monarch habitats—"The Butterfly Road" bill. Of course, there is no such activist, and no such legislation, either. In the end, Farrington is surrounded by another flock of his beloved monarchs, which, for one last time, transform his aged body into a butterfly's. The shifts between fantasy and accurate details give the story sophisticated, screenplay-style impact; whether younger readers will understand the blurred boundaries between fiction and fact is less clear. Ages 6-up.