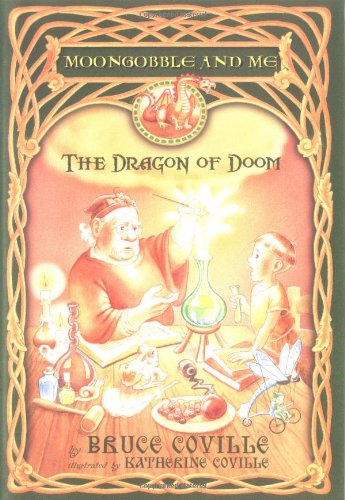 THE DRAGON OF DOOM

Despite its title, this inaugural installment of Coville's (the Space Brat books) Moongobble and Me series offers little that is child-pleasingly chilling. Narrator Edward, who lives with his mother at the edge of Pigbone, a seemingly timeless town, complains that his life lacks excitement. He hopes this will change when Moongobble, a bumbling would-be magician, moves into a nearby cottage. Yet even after the boy becomes assistant to this good-natured fellow, the excitement—and enchantment—are in short supply. Edward's new neighbor explains that he is a former shoemaker who (in a wry reference to a familiar story) became interested in magic after "a group of elves started to help me out." But in order to join the Society of Magicians, Moongobble must either pass a magic test (which he fails after performing his signature bungled trick, changing a stone into blue cheese and splattering green goo everywhere) or perform "three Mighty Tasks." He here tackles the first one, an assignment to retrieve the Golden Acorns of Alcoona, guarded by a "deadly dragon" (which turns out to be diminutive and benign) with anticlimactic results. Short sentences, paragraphs and chapters, as well as Katherine Coville's appealing, softly focused graphite illustrations, tailor this tale to beginning or reluctant readers. But despite the splashes of humor (Moongobble's sidekick, a talking frog, utters some punchy one-liners), Coville fans will likely find this disappointing. Ages 6-10.