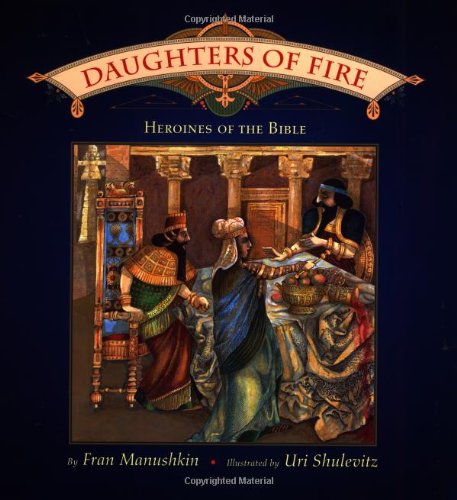 DAUGHTERS OF FIRE: Heroines of the Bible

Manushkin () brings to the women of the Hebrew Bible the richness and complexity of the wider Jewish traditions preserved in the Talmud, Midrash and other sources. From Eve to Esther, these heroines demonstrate not so much a sense of girl power or feminism in the contemporary sense, but rather an often fierce combination of courage, passion, faith and human frailty. These women shine with the grace of God yet also manifest flashes of anger, jealousy, deceit or doubt. Readers will respond not only to these powerful characterizations but to the enhanced details of the storytelling. Here, for example, Adam is created with two faces, "female on one side, and male on the other." When God realizes that Adam needs a mate, he removes one of Adam's sides and fashions Eve. Later, God chastises Adam for blaming Eve after he eats the forbidden fruit. The author skillfully links the majority of her stories via characters and settings, allowing them to flow smoothly as one large, colorful history. Caldecott Medalist Shulevitz () contributes a series of elegant, jewel-toned full-page illustrations, as well as spot art. In mixed-media compositions (he uses watercolor, pen-and-ink, and what appears to be woodblock printing), his figures seem softer-edged than usual, and the focus more diffused. His art, like the storytelling, startles the audience into fresh insights and appreciation. All ages.