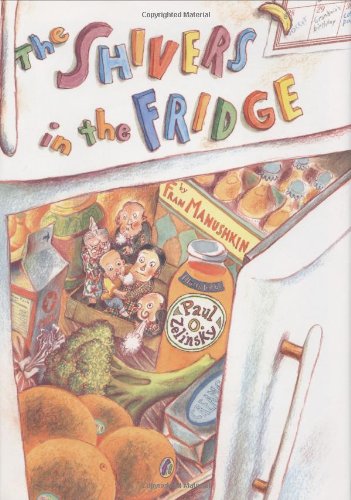 The Shivers in the Fridge

Manushkin ( ) imagines a miniature family that lives in the dark recesses of a refrigerator. The Shivers family "huddle[s] together for warmth," overlooking geographic ranges such as Orange Hills and, deep in the lettuce crisper, Spooky Jungle. Occasionally, "the whole world began to shake, and a great blazing light shone forth." A human has opened the door, but the Shivers only perceive a grasping "monster" and a curious pointy-eared cat. One day, Papa Shivers decides to find them "a warmer place to live," slips on Buttery Cliff and vanishes. The next day, Grandpa looks for him (the men take the initiatives here) and gets stuck to the lid of Mt. Ketchup. Later, the monster captures Mama and Grandma; alone, "Sonny hugged his Honey Bear for comfort, but all he got was sticky." Readers wonder: Who are the Shivers? are they, since they resemble people but are flat and flexible? Will they thrive in the outside world? Zelinsky ( ; ) here employs a sketchy colored-pencil style, à la Laurie Keller. His close-up images preserve the comical mysteries and wonders of the fridge and, on rereadings, reveal how the Shivers got there. But the conclusion calls the premise into question: the Shivers have lived outside the fridge, so they should know about the monsters and temperate climate. Nevertheless, with Zelinsky's capable illustrations suggesting the Shivers' confusion at things readers take for granted, Manushkin gives a quirky perspective on a major appliance. Ages 4-up.