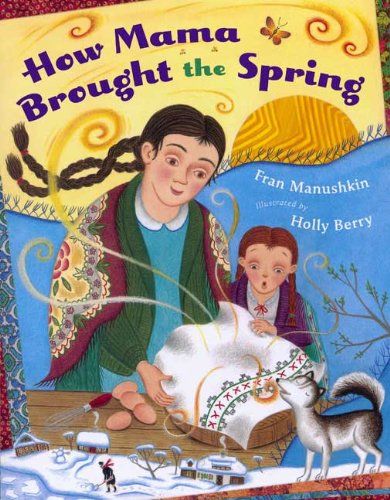 How Mama Brought the Spring

Rosy Levine and her cat, Moishe, are protesting the long Chicago winter by refusing to get up. So Mama tells a story from her own girlhood back in Minsk, where Rosy’s grandmother, Beatrice, chased away the winter by cooking a delicious batch of blintzes (a recipe can be found on the final page). Working in the colors and motifs of Russian folk art, Berry ( ) conjures a frosty but idyllic Old Country. The family’s robust faces suggest those of matryoshka (nesting dolls), the cottage is tidy and quaint, Rosy’s grandfather has a dashing Dr. Zhivago look going, and Beatrice is almost soignée in her patterned babushka and elaborate shawl. “Soon they sizzled so,” says Manushkin’s ( ) Mama of the blintzes, “I saw the ice on our windows melt.” The blintzes’ spring-evoking powers aren’t confined just to the household: in Berry’s whimsically imagined outside world, animals bask in radiant warmth, sunflowers burst forth from the earth, and music literally fills the air. Why, then, does this pretty, goodhearted book not achieve emotional traction? Perhaps it’s because this clearly Jewish family feels denatured by the match-up with Russian folk styles. Except for their last name (and the cat’s) and the occasional Yiddish inflections in Mama’s speech (“Winters today—what they? A few little puffs and they’re done”) the characters could belong to any or no tradition. The illustrations concentrate on making the kitchen a magical place, but they skip the seasoning. Ages 5-up.