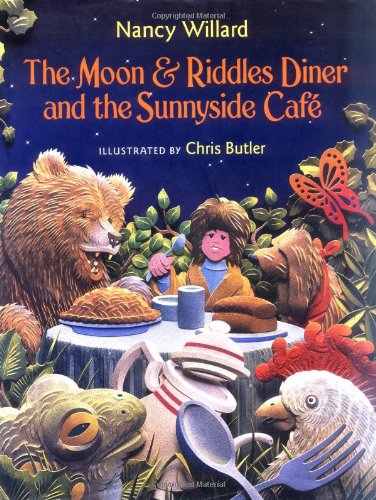 THE MOON & RIDDLES DINER AND THE SUNNYSIDE CAF

This airy but underdone collection has more style than substance. Willard's () prose preface introduces Shoofly Sally and the denizens of the eponymous establishment where "those who aren't eating are cooking. Those who aren't cooking are hooting and hollering. Everybody is dancing." The characters, animate and inanimate, tell their stories in rhymes and ballads. While the repetition of phrases and recurring characters hint at an overall theme, various motifs are never resolved. And while the fanciful similes are often apt (the teapot's crooning sounds "like the morning fog"), the language sometimes seems chosen more for sound or whimsy than for sense. The ample humor (in such notions as a cracked teapot that sings the blues and such puns as the Stubborn Stove's burners that play "Home on the Range") is dissipated by the arbitrary appearance and disappearance of the themes and characters. Newcomer Butler's striking illustrations, made by photographing layered, cut-paper sculptures, have the intricacy of David Wisniewski's work plus robust dimensionality. But the meticulously wrought figures lack personality; in general, the illustrations seem to focus on image and design at the expense of clarifying the text. Like a riddle without an answer, the art and text ultimately disappoint. Eight pages of recipes are appended. Ages 6-9.